I made a new toy lamb and stuffed with Blossom's wool.  When it was finished, my granddaughter told me I should have a birthday hat for it, just like the one I had made for Blossom's first birthday.  I found the pink polka dot fabric I had used, put it on my copy machine, reduced it and printed it.  Then I cut it out of that paper and made a tiny birthday hat.  I also cut out a very small number 1 out of felt, along with some decorations for the top and bottom of the hat. 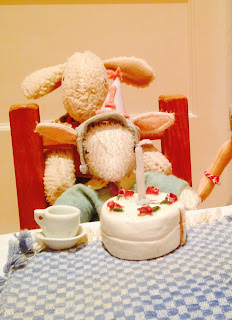 Blossom Has a Very Good Summer and Makes New Friends

Blossom has enjoyed the summer with her mother, Lucky, and two new lamb friends.  Everyone has been very kind to her and she loves being one of the flock!  She has given me more wool for my projects, as you will see in days to come. 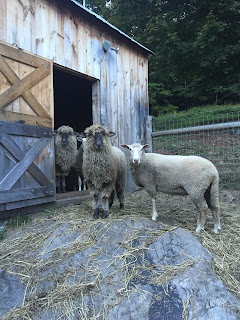 Jane and her Little Lambs 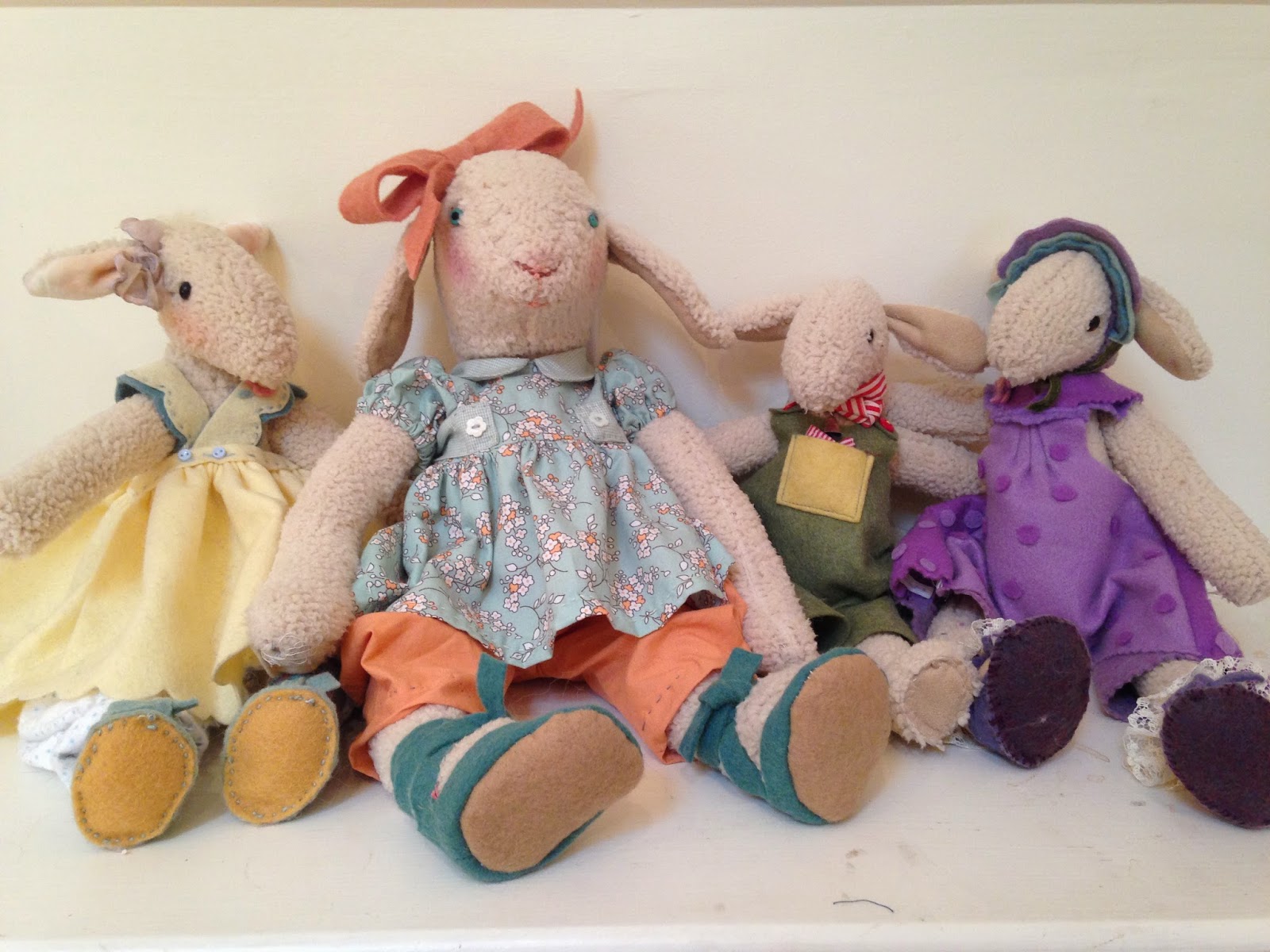 I have been sewing these little lambs and using Blossom's wool for stuffing.
Maybe March will go out like a lamb!
Posted by Unknown at 3:00 PM No comments:

The Story of Blossom 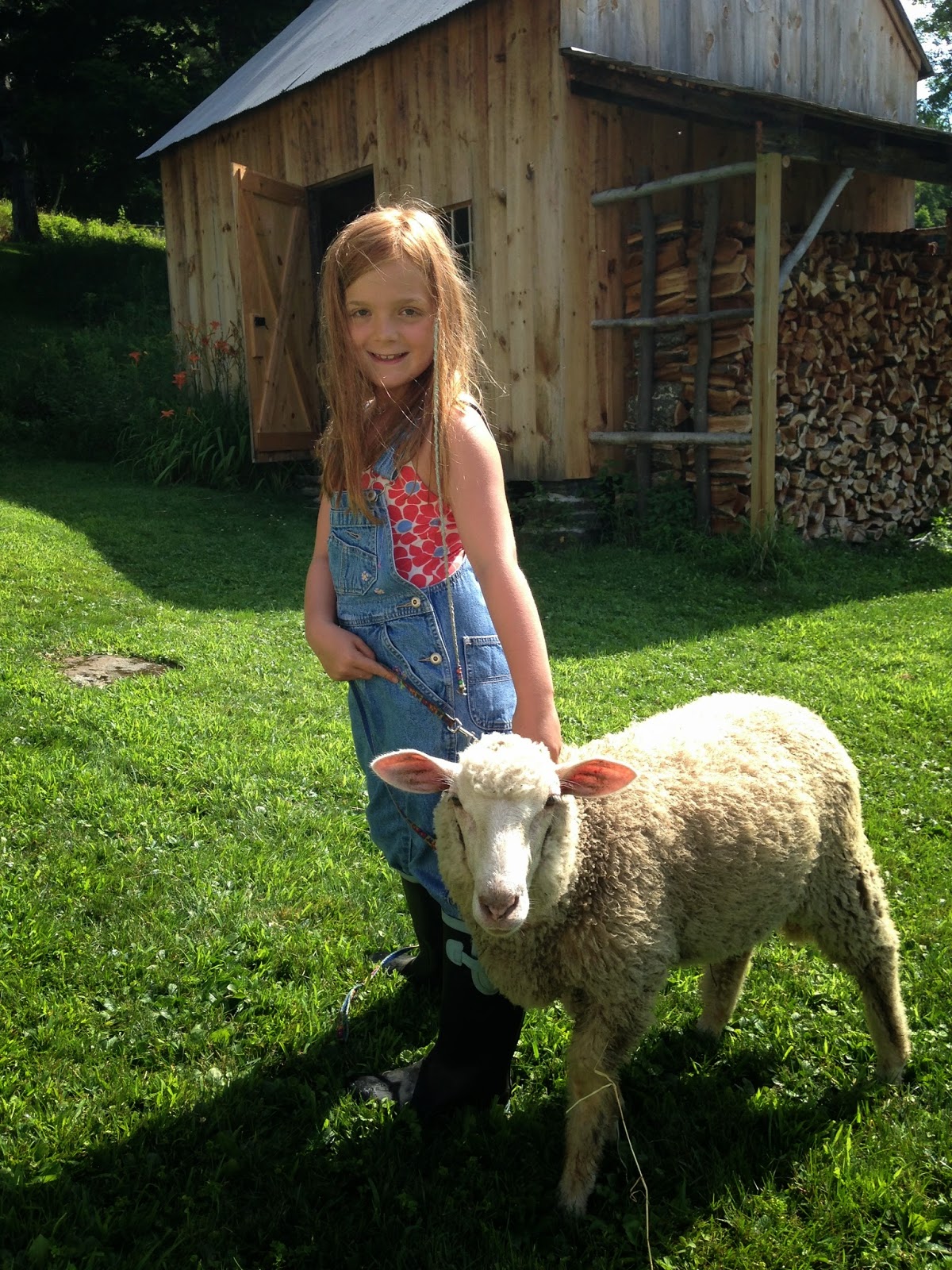 This is the story of Blossom, our little lamb.  It all started because I have always wanted to have some sheep.  Three years ago we “borrowed” four sheep from a farmer who lives near our summer home in the foothills of the Berkshire Mountains in western Massachusetts.  We had a wonderful time caring for them and watching them graze peacefully in our meadow. One of the sheep was a ewe named Lucky.  When it was time to give the sheep back for the winter, my granddaughter Clementine was especially sad to see Lucky go.

Once back at their farm, it was decided that they would breed Lucky.  On a very cold night in February of 2014, Lucky gave birth to twin lambs, a boy and a girl.  The boy was doing very well, but the little girl was smaller and having a harder time.  But then we got a call that the little boy lamb had died, we think from hypothermia (being too cold).  The next day they said the little girl lamb was unable to stand and very ill.  The farmer said it was up to God and nature, but I thought Jane Dyer might be able to help too.

We brought the little lamb back to our house in the city and I brought her up to my  third floor studio in a box lined with some wool from her mother.  We had to tube feed her and give her shots every 4 hours, according to instructions from the vet.  She was too weak to even take a bottle, and could not stand.  Her legs did not seem to work.

Gradually she began to get a little better, so I brought her box down to the living room of our house.  We tried bringing her back to her mother, but Lucky was not being very good about letting her nurse, but we couldn’t blame her, the little lamb still could not stand, although she was beginning to try.

We brought her back to our home again and began to bottle-feed her every four hours, setting our alarm at night.  She started to stand on one leg, then two, and finally after a few weeks, she could use her third leg just enough to drag the other back leg around as she tried to walk.  We put a diaper on her and let her walk around the living room.  When her last leg was finally stronger, I took her outside for a walk on the sidewalk.  People were calling me “Mary”.

As she continued to gain strength, we took her to my daughter’s house outside of Boston.  There she lived with my three grandchildren and their two bunnies.  At night she would sleep with one of the children’s toys, a big stuffed sheepdog named “Fluffy”.  As the little lamb continued to grow and gain strength, my grandchildren named her “Blossom”.

Blossom would run around outside with the children and come running in with them and leap onto the sofa, ready for story time.  On Fridays, the children always get to watch a movie, and Blossom was right there with them.  She often fell asleep curled up next to them, and sometimes they would fall asleep together.  But when it was time for the children to go up to their beds, Blossom would cuddle up with Fluffy.

Blossom loved playing with the bunnies, Timothy and Willie, so when Spring arrived and it was time to bring sheep back to our farm, my daughter packed up Blossom, the bunnies, and Fluffy the stuffed dog.  We retrieved Lucky and two other lambs and reunited Lucky and Blossom, and introduced them to the other lambs.  As it turned out, the two lambs were very mean to Blossom (we called them the evil twins) and they wouldn’t let her eat or sleep with them.  At night we would put Blossom on the other side of our little sheep barn with Timothy, Willie, and of course, Fluffy, where they would all sleep peacefully together.

One day we brought Fluffy, the stuffed sheepdog out into the field with Blossom.  The evil twin lambs were scared of Fluffy, so I thought that they must think Blossom to be very brave.  But then they went up to Fluffy as Blossom stood next to her in the meadow, sniffed the toy dog, and realizing it was not a danger, butted Blossom away.  Then the twin sheep lay down next to Fluffy!

It was hard to see everyone being mean to Blossom, so we fed her in the other part of the barn.  Eventually, Blossom wanted to try to fight her way over to the feeding trough and fend for herself, and she wanted to sleep on that side of the barn, too.  It was hard to let her go.  She was becoming a real sheep.

Blossom’s second spring is almost here.  Lucky and Blossom have spent their winter with some very nice sheep where they have made friends, and soon it will be time to bring them back to our summer home.
Posted by Unknown at 2:42 PM 1 comment:

Blossom and her Music Box

This is Blossom last Spring, once she was strong enough to walk.  I thought she might like this music box.
Posted by Unknown at 3:50 PM No comments:

On February 25th, our lamb celebrated her first birthday. 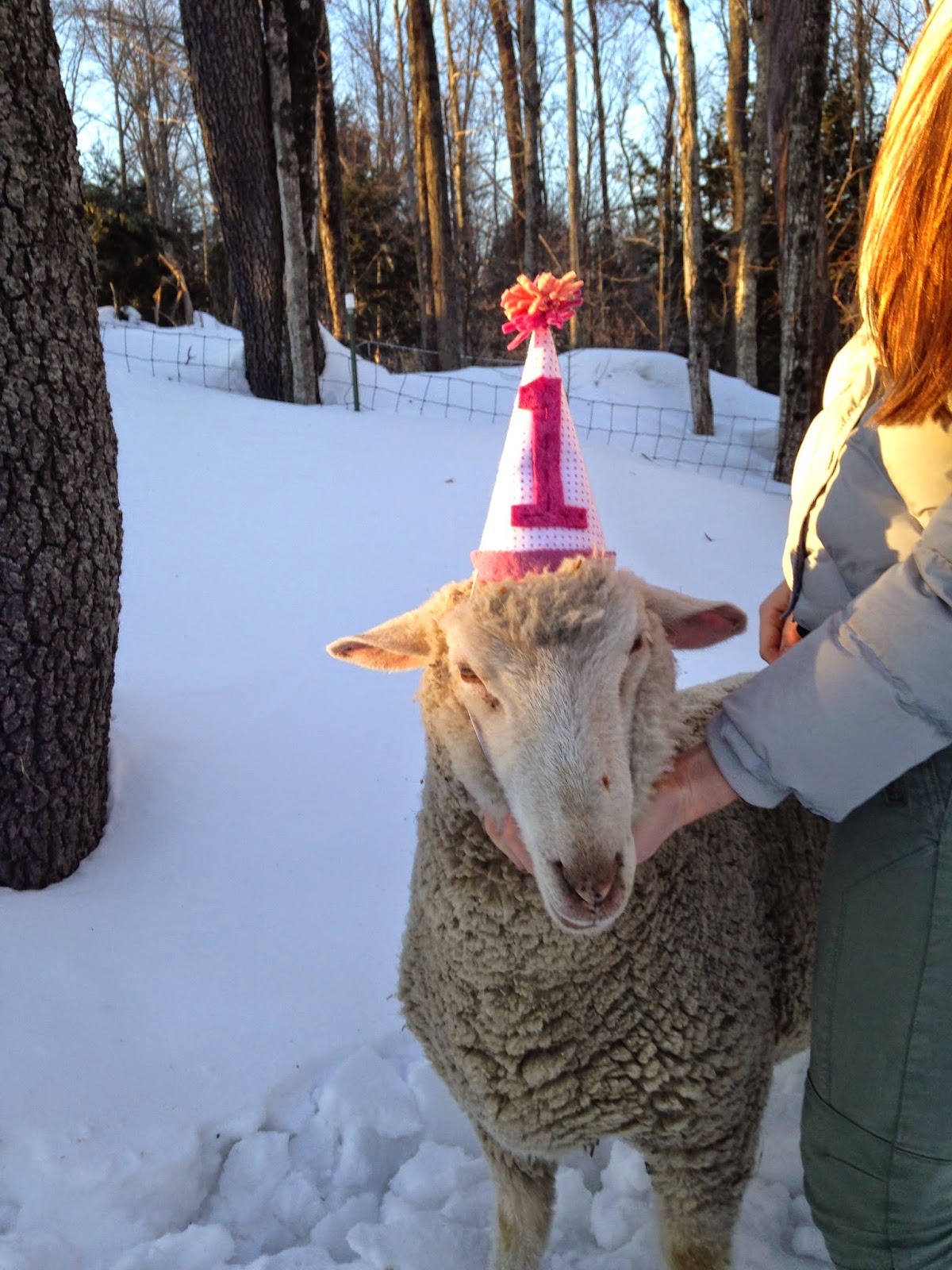 Posted by Unknown at 3:18 PM No comments:

Meyer Department Store in Melbourne, Australia chooses a different theme each year for their Christmas windows.  In 2014, they chose a book that I illustrated, SANTA CLAUS AND THE THREE BEARS, by Maria Modugno.  This is part 1 of four videos that can be found on you tube.  It was so much fun to see my illustrations come to life.

They sent me the first set of bears which just arrived.  We have plenty of snow for them, so I put them outside to do some reading. Posted by Unknown at 3:05 PM No comments:

The House That's Your Home 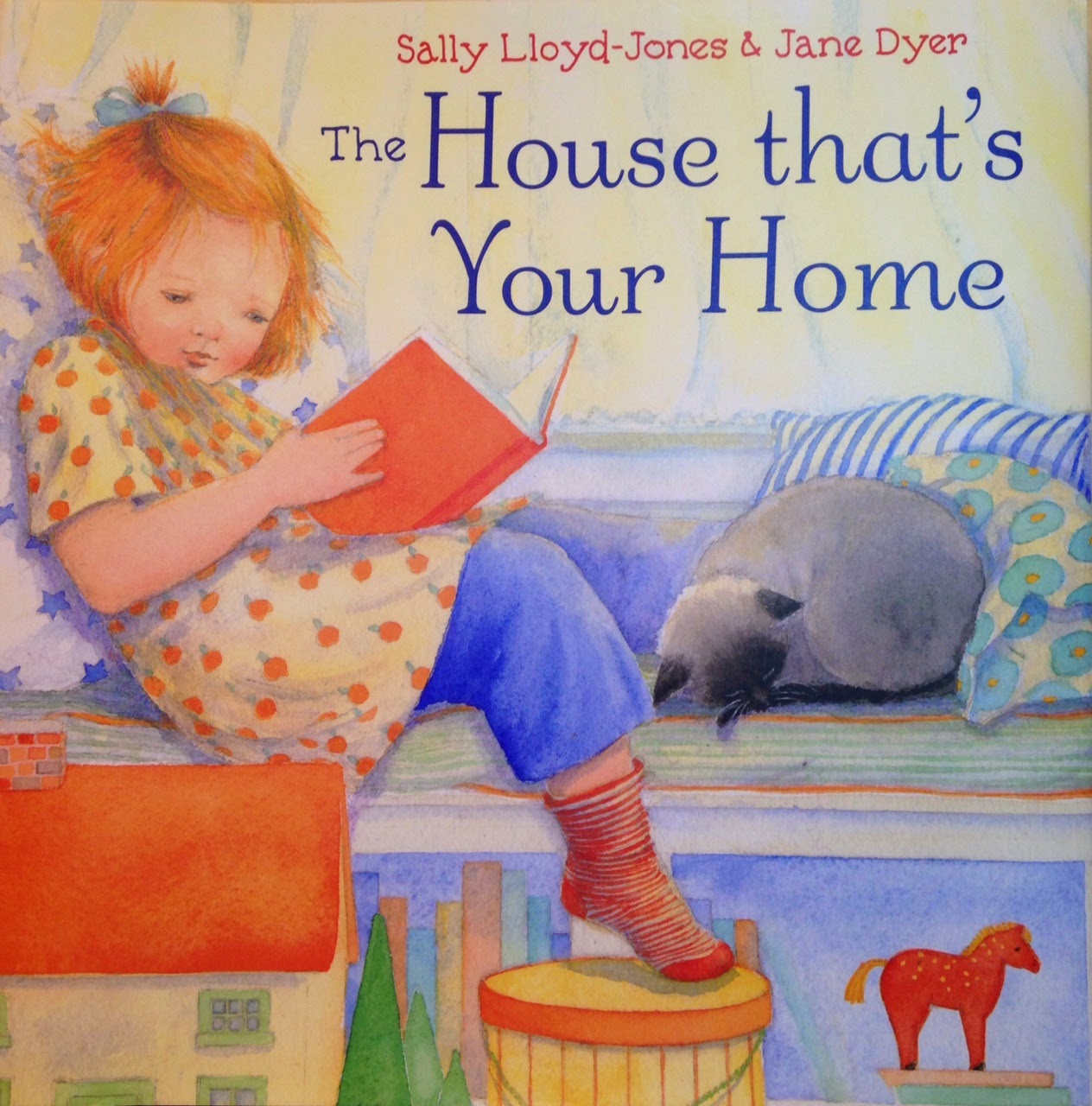